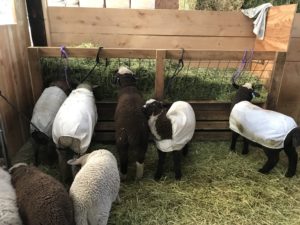 Today three of the lambs, one ewe and two rams were really testing to see if the halters would hold.   That littlest stinker ram managed to get his off three times  before I got it on correctly so he couldn’t get it off.   Then I tied him to the feeder with as little rope as possible so he can’t hurt himself, and let him play until he got tired.   Once tired to the point they don’t object to being touched, I release them.

There is one little Shetland – a tiny little ewe that put on a real rodeo show.  Straight up into the air and back down.  She landed on her back and tried every trick she could think of before giving up.  She used at least half an hour playing all these games.  Fortunately, I don’t give her enough rope to hang herself.   After 4 times with the halter on, I can now walk up to her and pet her and she stands perfectly still.

Next year I will start halters on the babies at a younger age.   It makes them so much easier to handle.